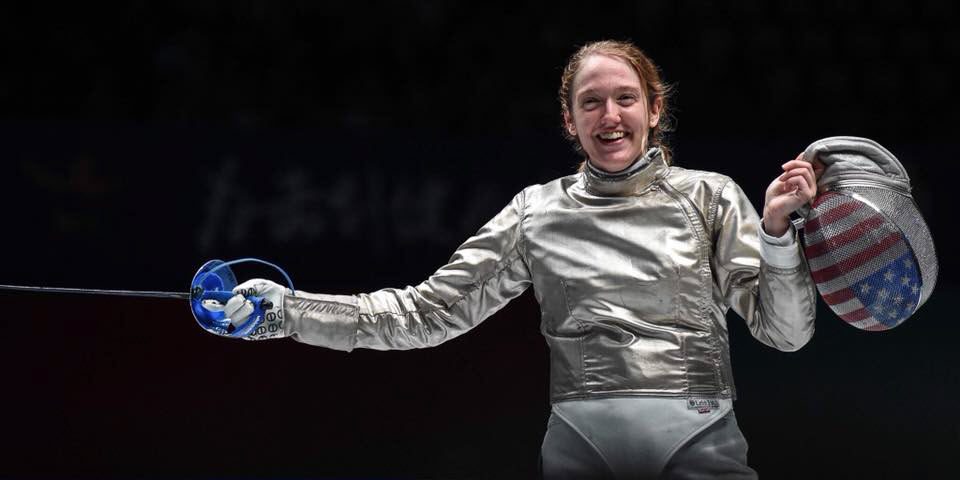 “Fencing has changed my life. It has taught me to be resilient, to plan meticulously, and to have the confidence to carry on. The setbacks make the successes sweeter.”

A pizza helped determine my destiny. Nearly 20 years ago, my siblings and I were home-schooled, and my parents were looking for sports we could take part in without a school team. We happened to go out for pizza at a neighborhood restaurant, and a flier on the table described beginning classes at a local fencing club. This piqued everyone’s curiosity. Having just watched the original Star Wars trilogy, I definitely loved the idea of being a Jedi Knight. My older sister was concentrating on ballet, but my younger brother and sister were excited to join me.
In September 2000, at nine years old, I joined Fencing 2000, a small club in downtown Chicago, and began learning to fence. My siblings and I were captivated. Soon after we enrolled, a new world class saber coach, Hristo Etropolski, a former Bulgarian national team member and Olympian, started teaching at our club. Hristo was wonderful with children. He took us under his wing and changed our lives forever. After a few weeks of his instruction, we all went to our first tournament together at McCormick Place in downtown Chicago. A year later, we were competing at national competitions in the youth categories. In my second event, a Y10 competition in Sacramento, CA, I won the bronze medal. 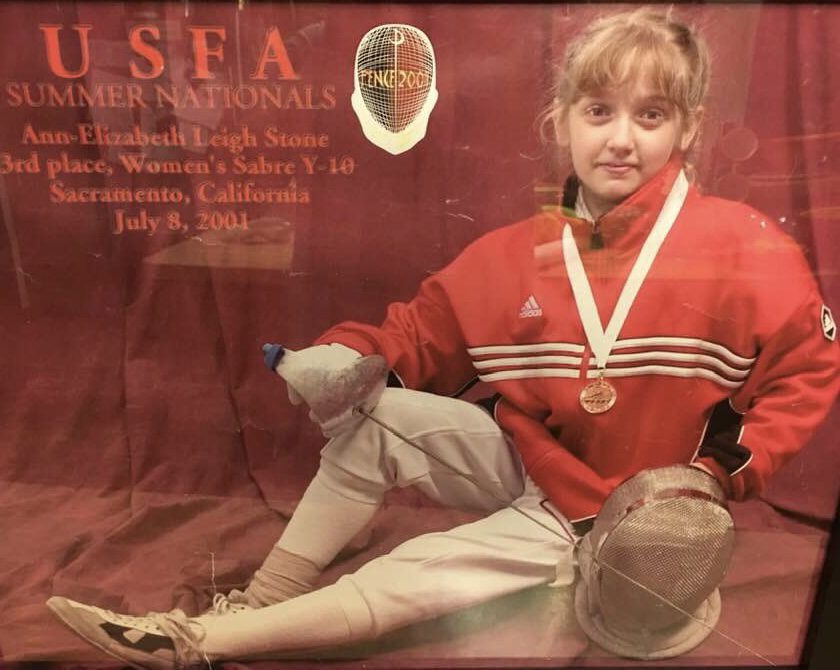 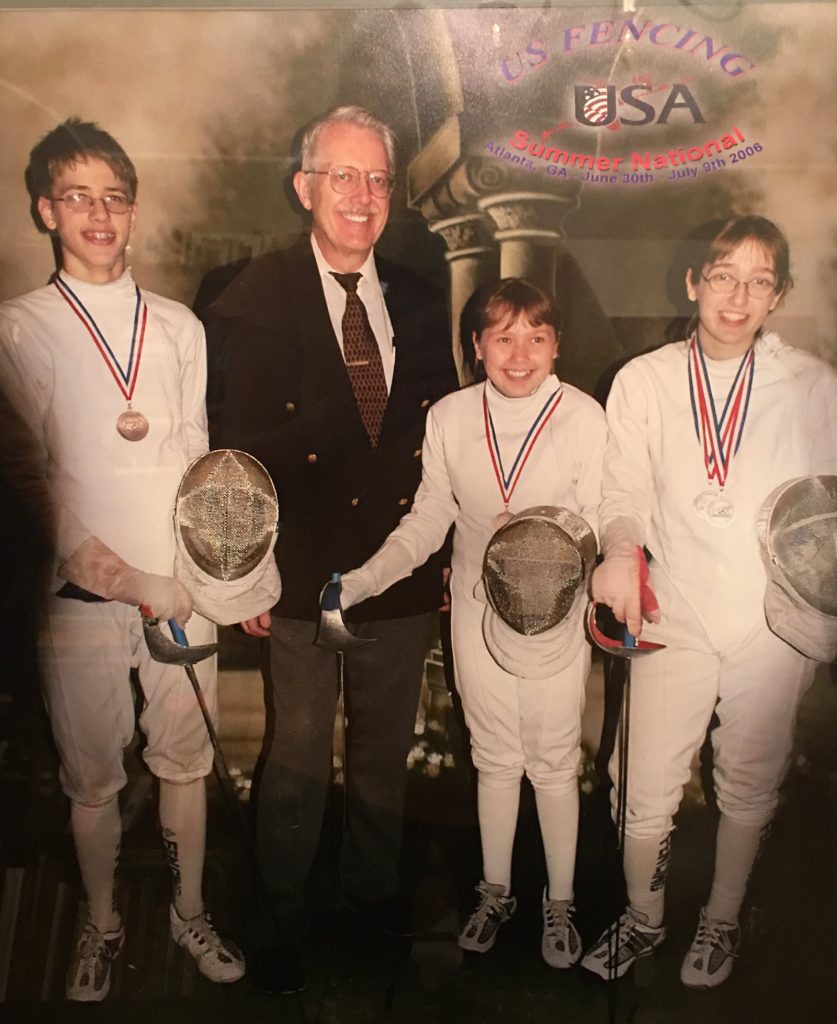 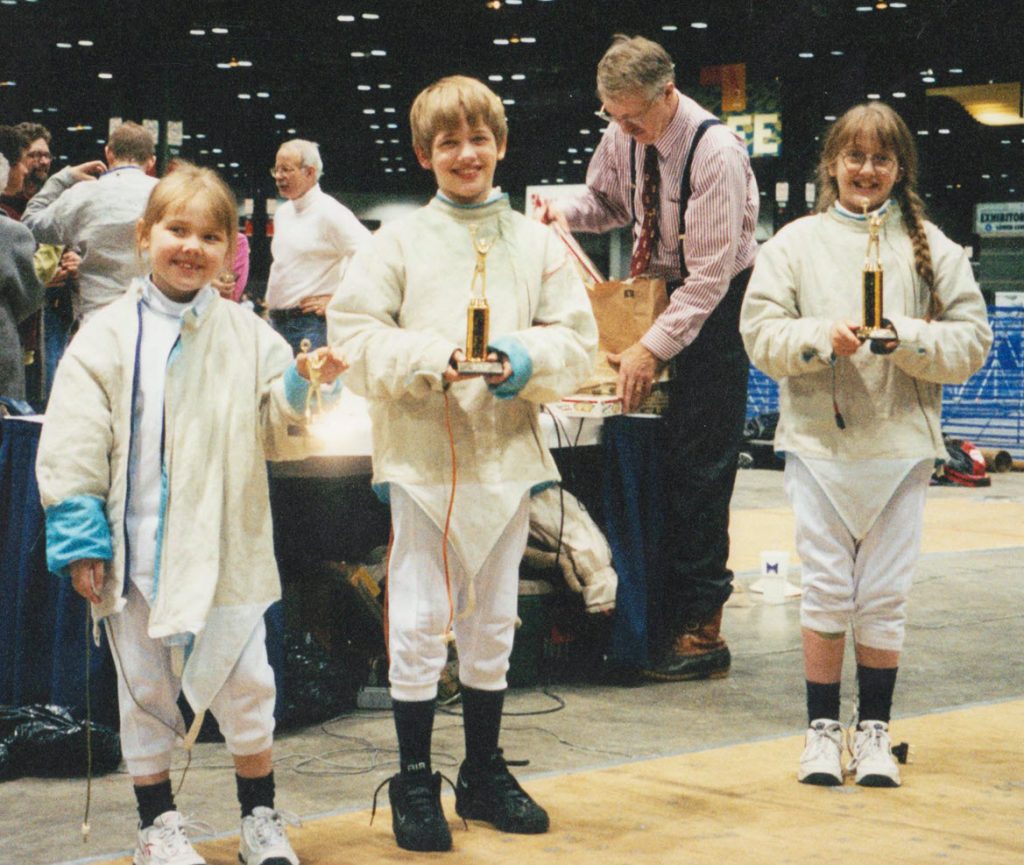 Over the next decade, under Hristo’s guidance, we started medaling at most regional and national events. I nearly made it onto several cadet and junior world teams, but my family could not afford to send us to international events, and without participating in those, we could not accumulate enough points to qualify, despite winning domestic events. We never focused on that aspect. My siblings and I fenced because we loved it, and we went to as many tournaments as my parents could manage. They sacrificed most evenings by taking us to practice and drove us across the country for competitions more times than I can count. Yet, they never pressured us to excel.
At the same time, my parents taught us politics, philosophy, and literature. They hired students at the University of Chicago to teach us Latin, Greek, Arabic, writing, and the sciences. My siblings and I were so competitive, we would sit at the dining table and complete chapter after chapter in our textbooks, tallying them off and waiting for the others to concede defeat. This attitude defined our teenage fencing years together as well, pushing us to practice harder and be better, if only to beat each other. By the age of 17, I was ranked at the top of my age group and was recruited to Princeton University.

At Princeton, I fenced on the varsity fencing team and had the good fortune to work with Hristo Hristov, one of Hristo Etropolski’s Bulgarian National teammates. He took my fencing to the next level. During my years on the team, I helped Princeton win 4 Ivy League Team Championship titles, earned All-Ivy honors all four years, and was the individual 2013 All-Ivy women’s saber champion. In addition, I was the first four-time All-American saberist in the history of the women’s program, including fencing three times in the NCAA Individual Final Four.
My brother and sister were also recruited to Princeton, based on their own phenomenal national fencing records, and in the 2012-2013 season, when I was a senior, my brother was a junior, and my sister was a freshman. That year, all three of us were on Princeton’s 12-member NCAA national championship squad, which went on to become the 2013 NCAA Team Champions. I was told later that if the Stone siblings had been a separate team, we still would have placed in the top four among all NCAA teams that year; a year in which I also won the individual NCAA Women’s Saber Championship Title. In honor of our NCAA accomplishments, the 2013 Princeton NCAA Fencing Team was invited to meet President Barack Obama at the White House. We even briefly got to teach him how to fence. 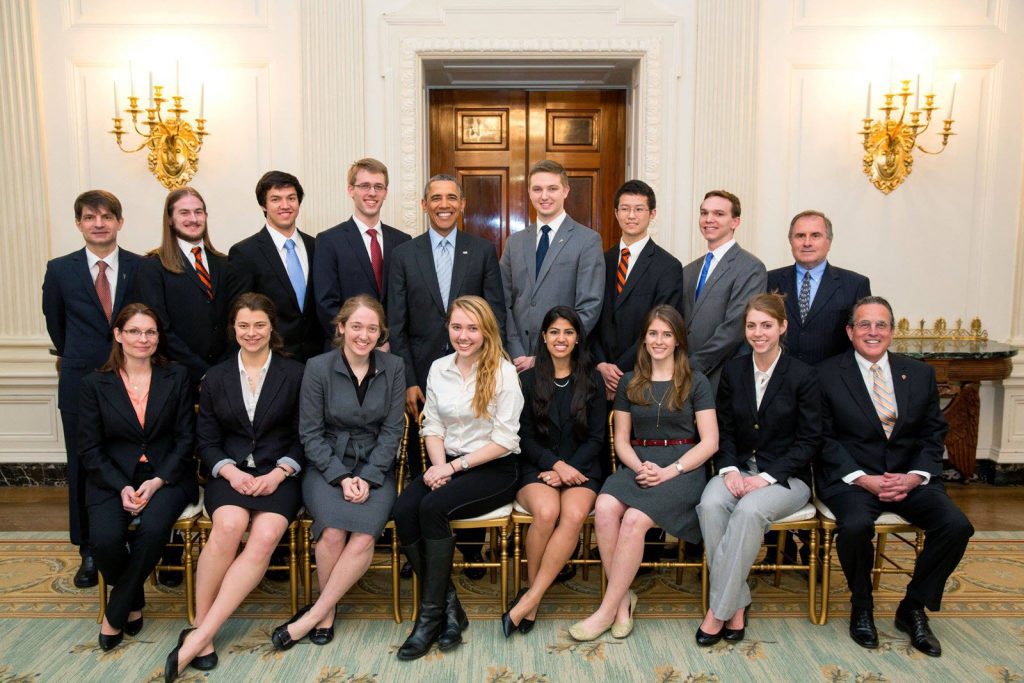 I was not ready to retire after graduation. In the United States, the only way to extend one’s fencing career after college is to try and make the national team. I knew I could do that if I learned to navigate the World Cup system. Friends at Princeton, experienced World Cup competitors, provided advice on how to travel internationally, how to save money whenever possible, how to find the cheapest plane tickets, and most importantly, how to be ready to compete at the highest level in the world while being alone, far from home, without a coach. Making my own way, in Summer 2013, at the end of my first season on the World Cup stage, I earned a place on the USA National Senior Women’s Saber team, which consists of the top four US competitors, and I was ranked number 13 in the world. It is unusual to go from having no international presence to topping the senior international rankings in a single season. Ordinarily, fencers build their way up through international cadet and junior tournaments, slowly finding success in senior events. But I had a little luck and did my best.
My fencing career continued to improve. By the end of the 2014 season, I was number seven in the world and had the honor of helping my USA teammates win the 2014 Team World Championship title. Life was golden. Then, as with all athletes, I hit some very real career obstacles. Right after becoming a team world champion, I sliced open my right (dominant) hand on glass at my part-time job in a chemistry laboratory. The tendon in my fourth finger had to be reattached, and as a part of the healing process, I was not allowed to move my hand for nearly three months. By the time I recovered, the muscles in my right forearm had atrophied. I couldn’t even tie my shoes. Nonetheless, I squeaked onto the 2015 national team, mostly with points I had obtained before my injury.

CONTROVERSY AND WHAT IS TO COME

Still, the sudden disruption to my fencing career affected my mental composure, and doubt started to creep into my fencing mindset. That, along with a series of other minor injuries, led to inconsistent performance the following season. I did not garner a spot on the 2016 Rio Olympic Team. Heartbroken and ashamed, I watched from home as my hardworking teammates became Olympic bronze medalists. My coach, who had remained at Princeton long enough to get me through the 2016 Olympic season, retired to spend time with his family. I felt I had let myself down and disappointed my coach, my family, and everyone else who supported me along the way. It seemed like the world was telling me to give up.
I was wrong. Soon after Hristo Hristov’s retirement, I started talking with Oleg Stetsiv, the head coach at Bergen Fencing Club in Ho-Ho-Kus, NJ. Oleg had helped me at World Cup competitions when he was attending with his own students. He was also Princeton’s new saber coach. We met and had a very tough discussion. Although he knew I was struggling, he made it clear that I still had something to give to fencing. And if I could find the passion again, he would revamp my training and help me restart my fencing career. I considered all that he said and knew I was not ready to put away my saber. I would not let regret and shame taint my love for the sport. I would keep going and enjoy the journey, no matter what happened. 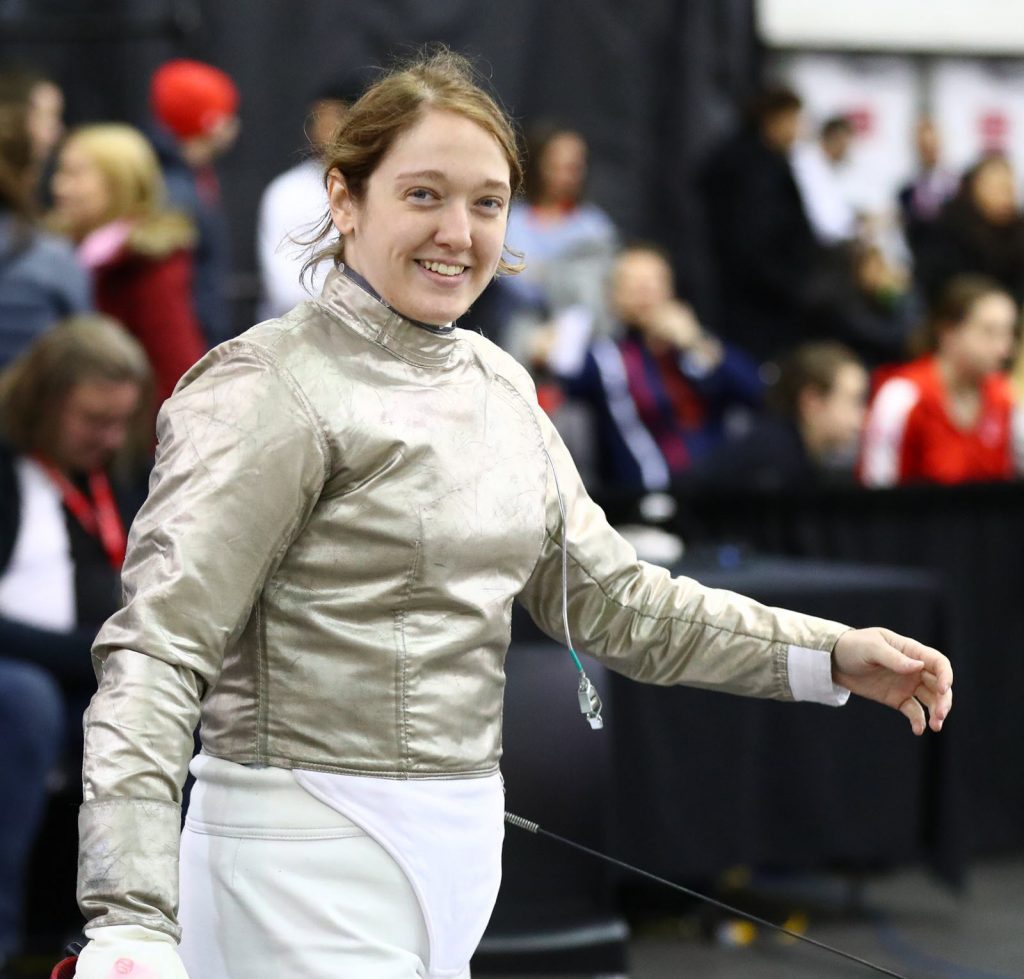 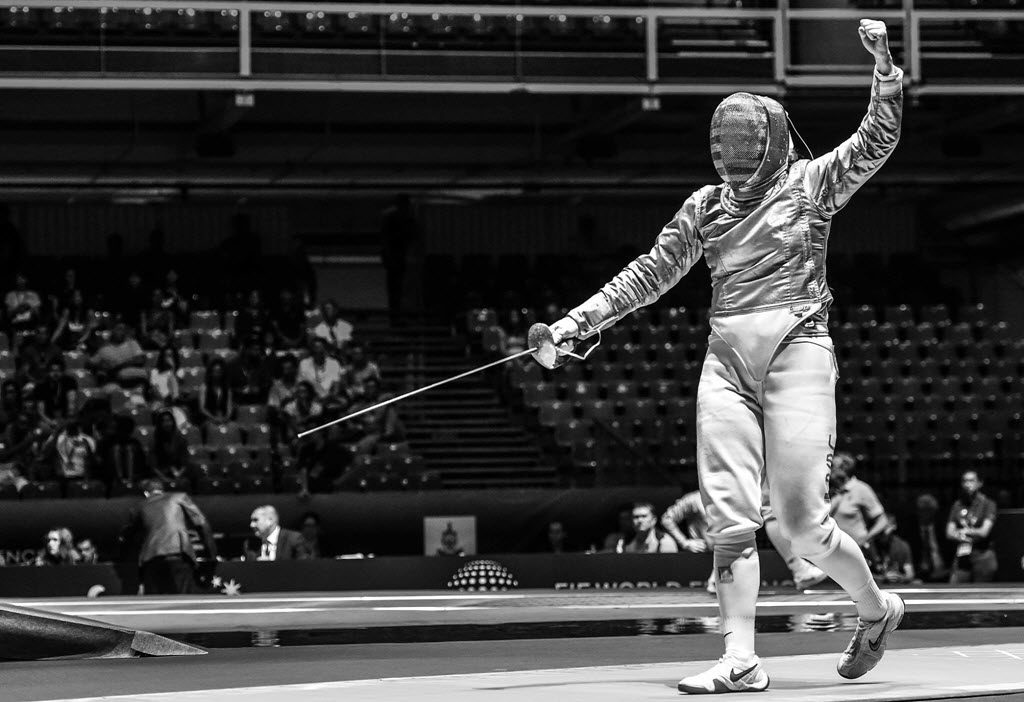 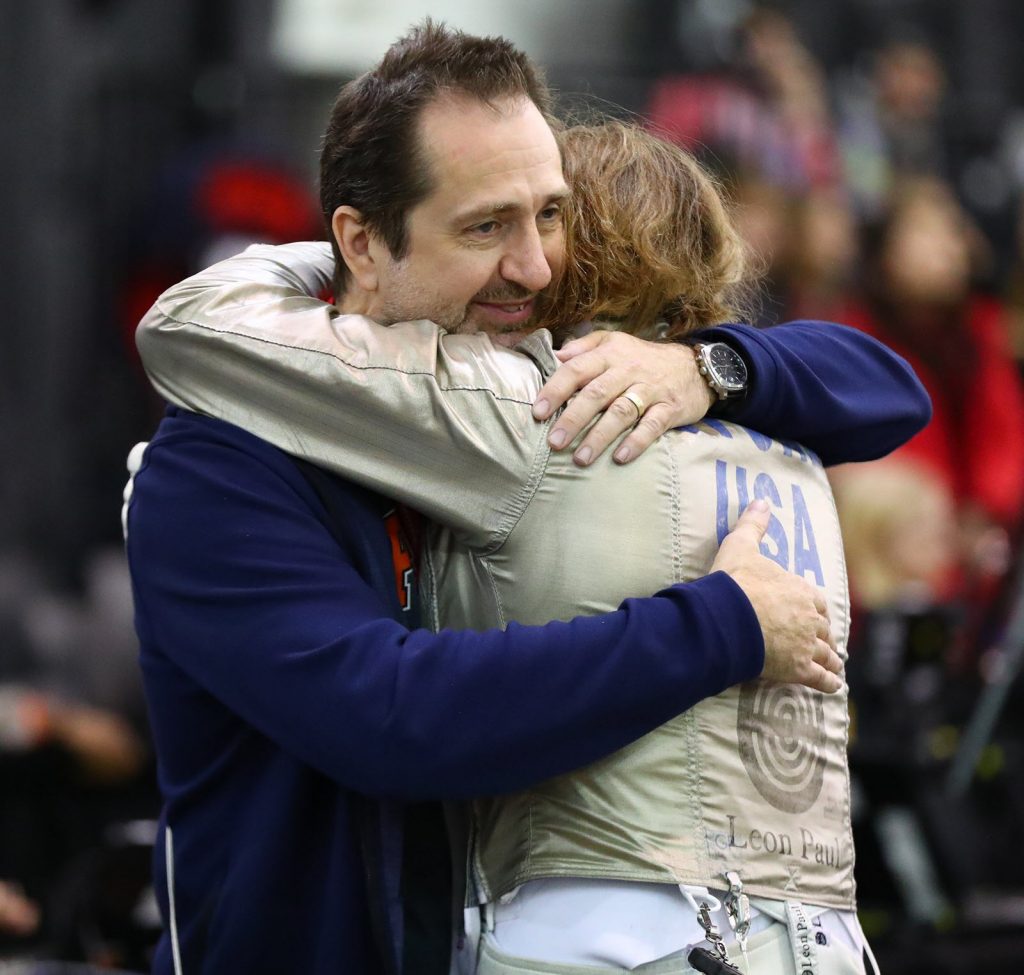 It wasn’t an easy climb back to the top, but Oleg helped me regain my confidence. I gave him 100% of my effort in training and focus, and he gave back just as much in all he taught me. I began assisting the Princeton varsity team and helped Oleg run a local youth fencing class in Princeton. He found ways to travel with me so that he could coach me at World Cup events. Under his direction, I won back my position on the USA senior team in 2017. I also worked with the USA team sports psychologist, Karen Cogan, who helped me structure a mental comeback. Undeterred by further injuries and surgeries, I had a new smarter approach to fencing, and Oleg knew when to drive me and when to encourage me. I had the tools to prevent anything from standing in my way. The training methods and competition plans Oleg and I put together enhanced my strength and confidence. I made the 2018 USA senior team and won the individual bronze medal at the 2018 World Championships. This past 2019-20 season, I became the 2019 Pan-American Zonal Champion, earned fifth place at World Championships, took 5th place at the Montreal Grande Prix, earned the bronze medal with the USA women’s saber team at Salt Lake City World Cup (our first time back on the podium in over a year), and won the gold medal at the Pan-American Games in Lima, Peru. We are now entering the final stretch for the 2020 Tokyo Olympic Games qualification. I am now ranked number five in the world, my career highest, and number one in the USA. I still have a lot of hard work ahead of me, but I will always give it my all, and I will enjoy the process.
With Oleg Stetsiv’s training and support, I intend to finally represent my country at the Olympics this summer in Tokyo. 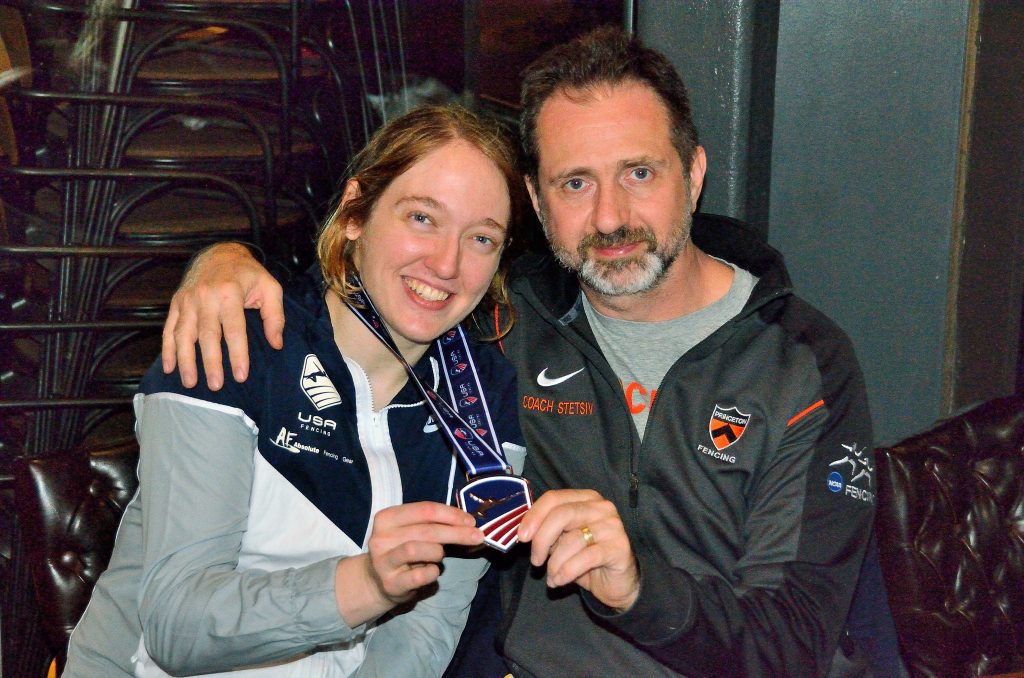 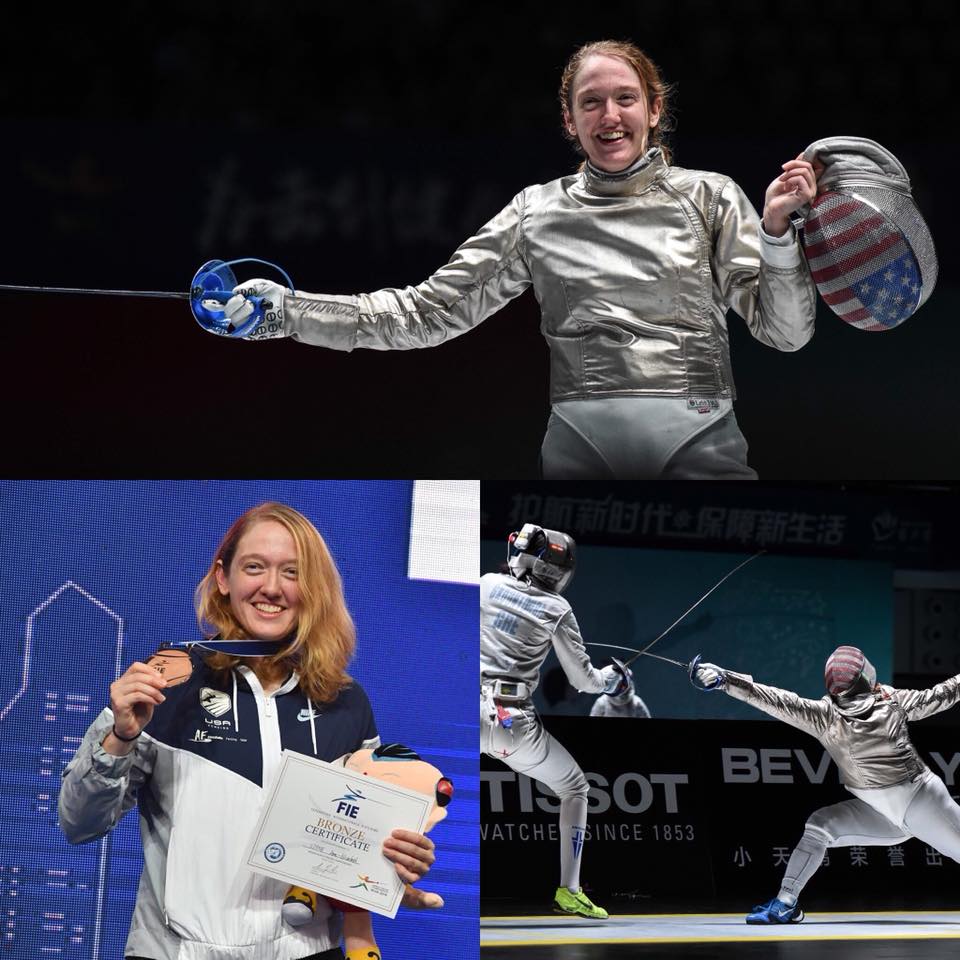 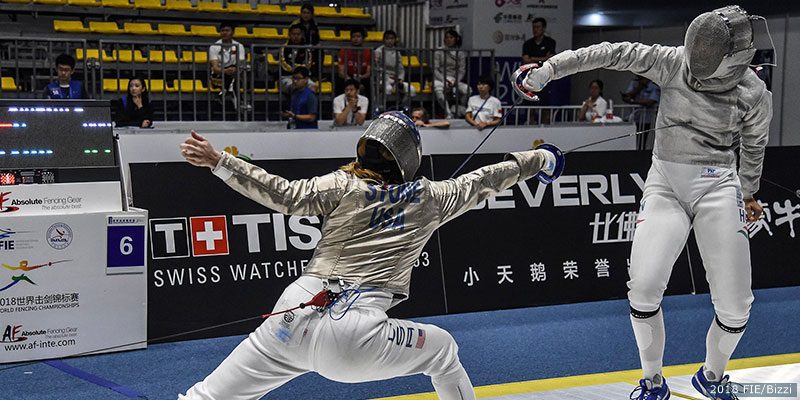